A Week Of Ups And Downs

A week of highs and lows, well I suppose that's the way life goes when you are a blues musician! A busy week though!

Last Friday we had the pleasure to share the bill with American artist Crosby Tyler, we in this case was Walker Broad. That is Sandy Walker on piano vocals and myself (Andy Broad) on guitar and the odd vocal as well. The gig was in the back room of the R.M.A. Tavern (often referred to as The Gun Room) it's an intimate venue seating about 40 with a nice little stage (with Red Velvet Curtains!) and a simple warm sounding in house P.A. It was a perfect occasion to try out the new set on a listening audience. The set is a 70% originals with a couple of well chosen covers / standards, our folky blend of blues and jazz went down well.

Saturday found Burnt Ice in the newly reopened Fawcett Inn in Southsea. We did this one as a three piece as Martin was in Sweden and Chris had a prior booking. The pub has been cleaned up somewhat from the 'previous version' and a had good size stage area and the three piece achieved a good solid sound. We weren't sure what to expect audience wise and in the end it was quieter than we would have liked, though by no means empty, it seems that many people were heading straight passed the pub on there way to Halloween parties on Albert Road. We got a very positive vibe from the new landlord and landlady though and look forward to it developing over time...

Monday found me back in The Gun Room @ the R.M.A Tavern to man the door for the Kent DuChaine gig. Kent is a great performer who I've worked with many times and never fails to give a great show. We had done a few ticket sakes on-line so I was feeling optimistic, however it was not to be! Unbelievably there was almost no walk- up and the end total reached only nine, yes nine! Usually we do three or four times more walk-up than on-line sales for this type of gig. For Kent who usually draws around 70 at Bullfrog gigs this was unbelievable! Kent went on and did a great gig, leaving nothing out and playing just as well as he would have to 90, a great tribute to his talent and professionalism. It was a last minute booking, a Monday night a different venue to usual but you still have to wonder what is going on in the world...

Dan At His Informal Session
Tuesday was yet another gig at the R.M.A. this time in the front bar with Walker Broad. Dan Ogus was running "an informal session" of acoustic music and had asked to join him for the evening. Also playing was Dave Auton, Ade Cull, Glen Malo and Dan Ogus himself. It was a very enjoyable evening with a great range of music mostly played acoustic literally unplugged (although our set was plugged in to balance the acoustic with the piano...) Look forward to more of these the next is on November 16th I understand.

Oh I forgot about the guitar lesson I gave on Monday! My new student Gavin is showing promise and is happy to go with my more philosophical non spoon feeding approach to teach finger style blues, I'll write more about that in another blog later, also think of making a guitar lesson video...

The Juke Joints
Thursday brought the Bullfrog at the Pier. The guests this month were The Juke Joints from Holland, they had last played the Bullfrog in 2003 and I new them to be a great act, however after Monday's turnout for Kent DuChaine I was feeling optimistic, JR had given them the option to pull out as it was their only UK gig of the tour, but they wanted to go for it, more power to them! They are great blues band with a full on sound, fronted by the drummer who sets his kit up on a portable podium at the front of the stage, all the musicians are top quality, the harmonica player doubles on cajun style squeeze box for a few numbers. well this time my pessimism was proved wrong! We had nearly 50 in not a huge audience admittedly but enough to give an atmosphere and to pay a reasonable amount to the band, they had come a long way! Their faith in them selves was justified! I have to say though the pier itself is slowly falling apart it's a great shame that such a fine resource is not better maintained. I think the Bullfrog is going to have to move venues to survive as more and more people are put of by walking past smelly bins, no lighting, etc. Obviously it's JR's decision, but I know he is investigating options. Good things could be happening next year! 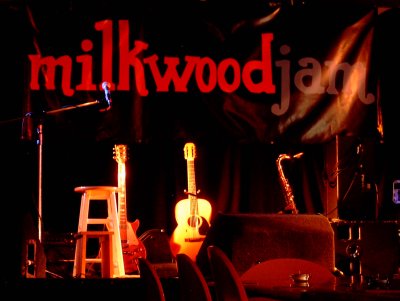 Stage Set Up at Milkwood Jam
Friday the 5th. was Blue Graffiti at The MilkwoodJam in Swansea. We had been booked for this one a few weeks back, one of their first Friday blues nights as I understand it (traditionally they had blues on Tuesdays) I'd enquired after the gig after noticing that Dave Acari was playing there, I knew we would be compatable with an audience who liked Dave. We got a little worried just before the gig as up till the week before everything had been going well communications wise but suddenly I couldn't get in touch to confirm sound check times PA requirements etc. But it all came good at the last minute, emails suddenly got through, correct telephone numbers communicated etc. So we set off with great enthusiasm it was a three hour drive about 200 miles so we left plenty of time for problems. And what a journey it start drizzling just out of Portsmouth, then it just got worse and worse, some moments we could hardly see! There were accidents traffic jams all sorts! Chris kept me entertained with anecdotes about his former life in Wales and the sites would could have been seeing if the weather wasn't so awful! We stopped off in Porthcawl for a cuppa at Chris' dads, then made it on to Swansea, the satnav confused me complete referring to non existing roundabouts and telling us to turn into one way streets the wrong way, but we got there in plenty of time for the get in. In fact we beat the owners there :-) The venue is wonderful really nice room, great PA system, Carol, & Rich were really friendly. We got a great sound in the check, the dressing room was really nice with fruit bowl tea and coffee etc. All seemed to be going well. The bubble was burst by the turnout it was disappointing to say the least, but taking a leaf from Kent DuChaine's book I was determined to give a good show anyway and we went on a played a strong acoustic set. It well received by those that were there and every single one of them bought a CD and got us to sign it. Lets hope they spread the word. It's hard to work out why gigs like this go wrong, it hadn't made the venue website, but on the other hand plenty of posters went up. and they had had CD to play on the previous weeks. Maybe it was the weather? It was fireworks night as well so maybe people were otherwise booked who knows? All I know is next time it will be better!

There are always ups and downs in this business but in the words of Muddy Waters "I love the life I live, I live the life I love" so I just keep going and know people will join me when I get there...