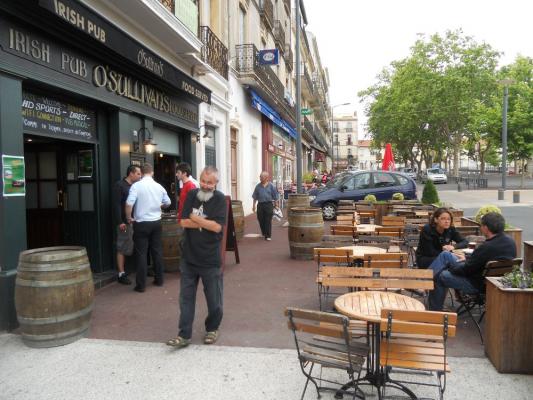 After a slow start to the weather over here, Thursday had started bright and sunny with only a few clouds. Very promising for the gig at O'Sullivan's in Beziers. But by the time we left for the gig, a relatively modest journey of 35km, the cloads were back, but thankfully not the rain!

O'Sullivan's as the name suggest was the second Irish Pub on the tour. Seems a little strange to travel to France to play in a bar that is pretty much the same as a pub in England, but it seems that most Irish bars put on a lot of music, of all genres, and this one has a lot of blues.

All set up and fed (it seems that almost every venue provides food for the band), the show started at 9:30pm. The Ireland verses Spain match was still on the telly, and although the management offered to turn the screens off once I started, it seemed prudent to leave it on as there were a few Spanish in watching, and we didn't want them to move to another venue! The match was finished soon any way.

It was quite a lively pub and the acoustic set got a little lost past the front couple of rows, but the electric punch through in the second set. Both were well received. Did the usual walk about with the radio set, and that went down as well as always. Every time I've done that so far as I got to the end of the slow blues, and launched into Mornin' Sun, the applause immediately turns into enthusiastic clapping along, very gratifying!

Several of the audience had come to last years gig at Le MaryJohn and had seen the advertising and come specially,there were also a lot of musicians in the audience. Including and american singer saxophonist, Jersey Julie from New Jersey, David Costa Coelho from Smokey Joe Combo, and more whose names I didn't get!

It's been cloudy again so far today, although not cold, and the sun is poking it's head through, which encouraging as tonight gig at Le MaryJohn is outside! It was the gig on the last tour where I recorded most of the Live in France CD and I am looking forward to it.

Big thanks to Pete (in the photo) for his assistance both with setting up this section of the tour and on the night with roadying, translating etc...