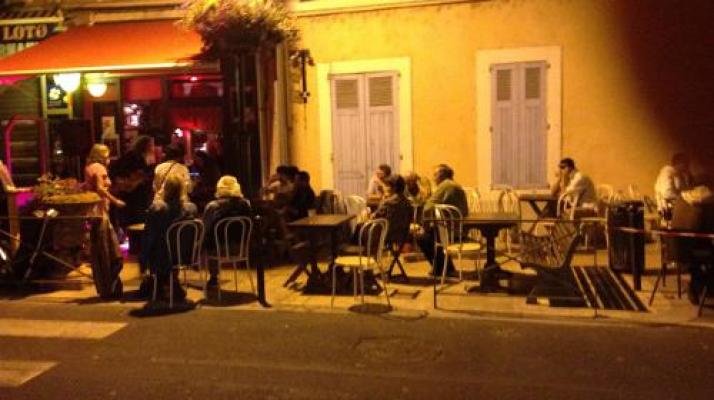 The day started cloudy again, when we made the visit to the cafe over the road from Le MaryJohn, which has become a daily routine for this section of the tour, it was quite overcast, but still didn't feel like rain, so I was optimistic.

But midway through the afternoon the sun poked it's head through the occasional gap in the clouds, then by 6 oclock the skies were blue, and they stayed that way till they became stary later on ...

Le MaryJohn was were I recorded the "Live In France" CD last september so I had really been looking forward to this one, as with last year the gig was 'â le terrace'. One reason to be grateful for the departure of Les Nuages!.

Got set up by 6 o'clock with a little more time to pay attention to the sound. Was fed pitza from avery nice restaurant across the road, then onstage at 8:30 pm. This gig started and finished a little earlier than is typical for the French gigs, due to noise limitations at night. A good crowd had already arrived though and it built nicely as my set progressed. I had got a very nice sound and was able to play with more subtlety than the night before. Received a good response from a mostly listening and occasional dancing audience!

Second set started around ten and as usual featured the electric guitar. Got some video of both sets to process later...

All in all a successful return visit, and quite abit of interest in the CD, particularly from those featured on the cover :-)

Tonight is the Bar des sports out in Graissassec, and small mining village nearby. There were a few local musicians at Le MaryJohn and there is some talk of a jam, with perhaps bass and drums in the later part of the second half. Should be fun if it comes off.