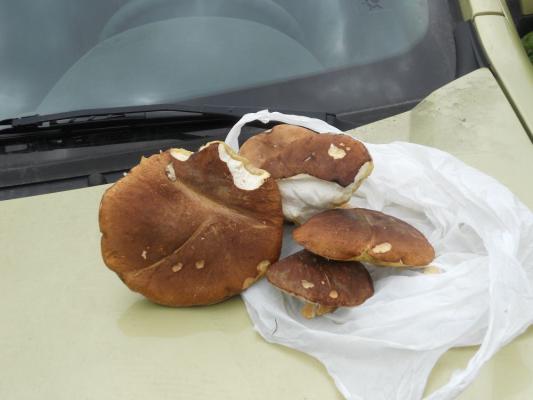 In the gap between the gig at Graissessac and The Mad Hatters, in Le Breuilliac I stayed in the south with Pete and Lynn (thanks again to them for their hospitality) and went into "tourist mode". On the Sunday night we went to a small music festival held at the bottom of a gorge just up the road from Poujol-sur-Orb. The festival was a part of the France (Europe?) wide Fête de Musique which nominally takes place on the 21st of June, with some events the weekend before and the weekend after.

This event had been moved from the weekend after to the weekend before with out any new advertising, so the numbers were down a bit on previous years, still quite a few people there though, when we arrived there was a modern jazz band on the main stage, did't catch their name but they were playing a very creditable "So What". After this they swapped the action to the second smaller stage, where two acts played a mix of "French Chanson" and a couple of bluesier numbers. Then it was the turn of Andy Boal (who played bass the night before at Graissessac) to play a half hour set of acoustic blues on the main stage. A good mix of standards, slide and finger style. In between all this a bag pipe player was wandering around playing music with a decidedly Scottish feel to it!

All this took place below a a massive cliff face, a really dramatic setting for a music festival. Unfortunately I forgot my camera so go no photos :-(

Monday was lazy, but on Tuesday we had planned to go for a longer walk, up in the mountains, at a place called Douche. And were accompanied by Charlotte a Friend of Pete and Linda's who lived near the walk.

It was a long circular route which "peaked" at a high viewpoint from which you could see the Mediterranean and the Pyrenees, or at least you would have been able to if the weather had been less hazy and not threatening to rain! The first 20 minutes of this walk were very challenging, ascending up the mountain very rapidly, not rock climbing but a pretty steep walk, the heart and lungs were definitely given a workout.

Charlotte had come armed with a plastic bag, and as we worked our way around the walk she managed to fill it with Cépes, large French mushrooms, that are particular delicacy, try as the rest of us might we could only find toadstools! A slice was had for dinner and proved very nice!

Tuesday night it rained like crazy, but I was having an early night anyway, one to recover from the walk and two because the next day I was off to meet another Charlotte, this one the owner of The Mad Hatters Kitchen, at Le Breuilliac, Chaunay, the scene of the last gig of this years tour.

It was a 7 hour drive going the scenic route again, this time the SatNav was well behaved, no trips down impassable tracks or any such, maybe just a slightly tight tune in one of the villages en route. A good journey in fine, maybe slightly too hot weather, I seemed to get stuck behind a few too many lorries, (hard to overtake on the wrong side of the road) but other than that quite pleasant.

Arrived a little ahead of schedule, to be greeted by three friendly dogs and a flock of chickens, then by Charlotte's son, Jake, Charlotte herself returned soon after, from a shopping trip for the restaurant.

Typing this from the caravan where I'll be staying the night, watching a large black cockerel strut his stuff, and looking forward to tomorrows Solstice feats at which I'm playing....

In the evening I was asked to join them for the family meal, which was very nice, it turned out that Jake was learning guitar and so after a little chatting I gave him an impromptu and informal guitar lesson, just a few pointers really.

Then off to sleep to the sound of the frogs croaking in the pond next door. I had thought they were ducks earlier in the day, from the noise they were making. Bit of a thunderstorm during the night, quite dramatic, but sunny this morning, fingers crossed for the feast this evening which is planned to be outside...