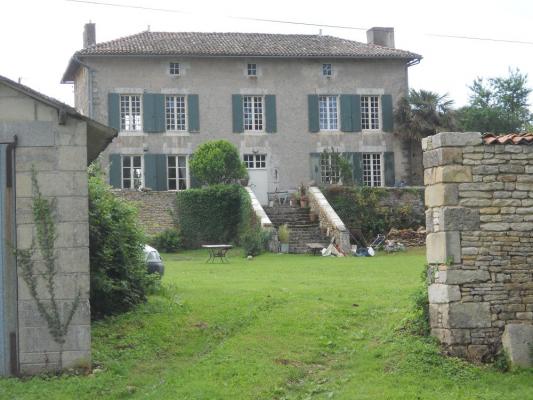 Having arrived at The Mad Hatters Kitchen the night before the last gig of the tour, I had the day to myself, so I spent the time in various ways. I went for a walk round the small village of Le Breuilliac, which seem a mainly farming village, with many typical farm building old and modern as you might expect on working farms. I took a few photographs, found the pool where the frogs lived (the ones that croaked at 2.00 in the morning!) but failed to see anything more than ripples on the pool. Got another section of video edited, and did some sketching (on paper for a change as when the sun wasn't too bright to see the laptop screen it was trying to rain, just a few spots, nothing on the scale of the thunderstorm that crashed and banged through the night before, but enough to make it unwise to use the laptop in the open.) I also got another section of video edited, I had at least on song from each gig ready on my hard disk to upload once I got back to England.

The plan for the gig in the evening was to hold it "feast style" with one long table on the garden lawn, however the weather was playing games with us, as it brightened up during the day, the wind also picked up, making it unhelpfully gusty, despite being sunny, so that it wouldn't't have been pleasant to eat outside, so the decision was made around 6 o'clock to move the feast into the restaurant.

There was just enough room for the numbers booked so all worked very well, the audience for this gig was almost all, if not entirely English, so I dispensed with any attempt to talk french, started my first set on acoustic guitar around 8.00. The room had a very nice sound and the performance was well received, played for just over an hour then took a break, and was fed a generous helping of the vegetarian elements of the feast.

Back for the electric set, which also went well, although a couple of things didn't work quite as planned, the walking around with the guitar, didn't work simply because there was no where to walk to in the full restaurant, that would have worked particularly well outside, the weather hasn't been kind on this tour at all, but never mind... a good response by the end of the gig.

Next day I was heading back to Dieppe to catch the ferry home, so I stripped down all the gear and packed the car so as to be ready for an early start.

Said my goodbyes in the morning, thanks to Charlotte and Glynn for the opportunity to play for them and for enabling me to stay the extra night, a godsend with the driving distances involved.

I headed off to Dieppe just before 9.00am as planned and intended to take the scenic route again, but found I was not making good time, too many lorries getting in my way! So parked up reprogrammed the SatNav to go the fastest route with tolls and cut the journey time down by two hours, at the expense of a more boring drive and about 35 euros in tolls.

Arrived in good time for the ferry. The ferry crossing was a bit rough, to say the least, and whilst I wasn't sick I didn't have a comfortable time. I slept for the first hour, then I planned to do some more video editing on the laptop but found I couldn't concentrate on the screen with all the pitching and yawing of the ferry. So the main problem was boredom, combined with the motion of the ferry, the arrival time of 9pm came along after a long time it seemed, minutes seemed like hours and the hours seemed like days to quote Muddy Waters. As the time finally arrived there was an announcement apologising for a delay of 25 minutes! I did't think I could cope with another 25 subjective hours! My favourite way to cope with sea sickness is to go on deck in the fresh air and watch the sea, but as the sea was rough they had closed off all the outside decks, at this last moment I realised that there was a small section open for the smokers to go out! I rushed out out, and gained immediate relief! Also had the added advantage that I could watch us come into port, and watch the interesting process of docking the ship.

I had a 60/70 mile drive to get back to Portsmouth, which shouldn't have been a problem, but having avoided sickness on the ferry suddenly it came over me on the way home. I had to stop a few times and the journey home became quite difficult, not a pleasant ending to the tour at all, but I got home okay and waking up next day all was okay again and I was able enjoy the memories of what has been a great tour, now looking forward to the next one! Well worth the 1565 mile round trip!