Oh my god it&squotes full of stars ... always a gamble.

Two working titles for this bit of the blog were, "Oh my god it's full of stars ..." and "Always a gamble...", read the end to find out why. Or perhaps the simpler "Au bord de la Charente" which is where I'm writing this, sat outside the Gabariers the day after a great gig.

I managed to get a couple of hours with my head down, In the old mobile home where I would be staying the night, got up at 18:30 and started to set up, the gear all felt a bit heavy for the first few minutes until I'd when properly. Gabariers has a decent size stage area in the bar, with lighting, but I was using my own PA. With some much space it was easy to set the stage, it's always nice to be to move around the back of the PA to wire it up rather than groping awkwardly. The sound was great! I got a good onstage stage, clear and with plenty of volume to reach the outside of the venue, on a hot night like this many of the audience would be eating outside on the terrace...

Although there plenty of lights it seemed a colleague of Simon's (the patron) had borrowed much of the lighting gear to do the lights for another concert the week before, and hadn't been able to return them due to Illness, consequently there was only one red gel and the rest could be any colour I liked, as long it was white! Still adding in my two little coloured strobes the stage still looked okay.

I was due to start at 22:00 and was setup by 20:00, so a couple of hours to kill. Much of that was spent eating the meal provided by the house, as is the custom in France, I've yet to play a gig where I wasn't fed! Id warned them in advance that I was vegetarian and had an excellent plate of goats cheese on french bread toast with melon and salad, and interesting combination. Very nice!. Along with a glass of what I think was a Belgian beer.

Whilst I was eating a steady stream of customers arrived and the terrace was quite full by ten but as expected not many inside, Simon the landlord suggest I boost the volume for the first set, to attract them in, so I took his advice, and started into my first set at ten o'clock playing to and enthusiastic 6 people in the bar. Soon I had another 6 sitting directly outside the door by the stage and more drifted into the bar proper. So I had a good audience directly in front of me. Which always help as knowing people are listen outside is not the same as seeing the whites of their eyes! I plated for an hour and a quarter before taking a break. With a great response, and quite a decent audience by the end, people started to drift outside again straight away though so it seem ed like I might have to start from scratch in the second set! 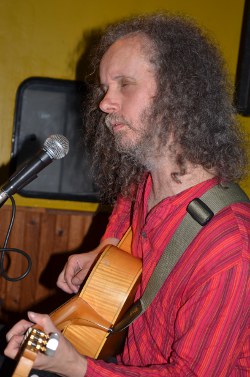 Photo: by 'Patrick Photo'
During the break I chatted with a older guy with a camera "Patrick Photo" he had been photographing me during the gig and we managed to converse fairly well, with a mixture of my band french and his limited English. I got 40 photos from him at the end of the nigh.!

I start the send set around 11:30 on electric guitar and its started very well. My walk out into the crowd, who came back in straight away, went down very well and all was going well when the guitar start to cut out intermittently! I initially suspected the speaker leads and started swapping cables in between songs, but to no avail, the problem gradually got worse, maybe it was the radio pickup? Changed to a guitar lead. No, not that! After a while it seemed it must be the lead from preamp, swapped that out, no change, very frustrating and whilst the audience had abandoned me I was finding hard to keep the continuity going! I abandoned the preamp and went straight to using my old busking amp which I had brought as a fallback / monitor if needed, for 20 watt it can make quite a noise, and worked a treat if a little clean sounding for the rest of the night. I finished with some more acoustic numbers playing up till 1.00 am.

A great night! the end of a very long day that started at about 8 o'clock the night before!

What about those working titles? Well as I looked up when walking to the caravan I was staying in, I got the best view of the milky way I've ever had! Hence the quote from Arthur C Clarke's science fiction classic. Then when I got there I realised I'd forget ten the caravan was without convenience, so back to the bar to use the indoors one, but the light were out, so if you've been paying attention to Sandy's Walker Broad lyrics and song titles you should be able to work that one out too!

Chill out for a while now before heading to the next gig at Verteuil-sur-Charente.