Go Back To Home Page
Click on the 'green' titles to expand and read a given blog entry, or click here to expand all blogs at once.

Travelling to Clare - Illness - The BakehouseViews: 4981

(No) Shadey deals with melon sellers, and cloned hotels.Views: 37524

Blues News From Portsmouth - The CDs are here!Views: 36936

Thunderstorms, The Big Cafe Gig and The Long And Winding RoadViews: 42561

Lizards, Damsel Flies, Fish and gig on the Terrace.Views: 42777

Last two gigs of the year and a Timelapse Christmas Card VideoViews: 46949

Airplay For Walker Broad on WednesdayViews: 47933

Blues with the goldfish In the garden at Dixieland Views: 48038

Now at the Hotel F1 in Angouleme the day after a great gig at the Dixieland. The laptop ran out of battery seconds after posting the last blog so it's good to see it made it up on to the net! I spent the rest of yesterday afternoon snoozing in the Dixieland's beer garden, the camera battery died some when during the the second set, and the phone battery went down at the same sort of time! So immediately I arrived at the hotel all eletricals plugged in and the electric surge is likely causing a brownout in Angouleme! 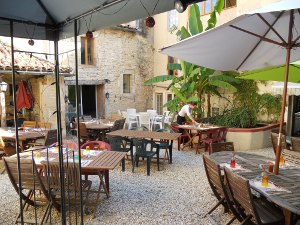 The weather yesterday was excellent, so for the first time I got to play on the Terrace stage in the Dixielands Courtyard garden. A wonderful atmospheric setting with the Chateau looming above. Shame the camera lens is not wide angle as you wont be able to see the Chateau on the vid. There was a hint of cloud early on but it never developed into rain, so a long and pleasant gig was had!

The plan was to start just after nine then play til 12 with breaks, I intended to do 3 x 45 mins sets, probably two on acoustic and 1 electric. It was a busy night in the restaurant with all the garden tables sold and also most of the restaurant, over 50 covers if I understood correctly.

As well as the human audience there was a small pond full of brightly coloured fish and one biggy, perhaps a Coy, certain somekind of carp. A few lizards were scampering arround on the walls too, taking advatage of the days heat!

The first set was going well with no signs of the technical problems on the guitar I'd had the night before. A few of the diners lefts but were quickly replaced with drinkers. Starting to feel a little tired, I stopped for moment to check the time, expecting it to be about 9:30 and feeling slightly concerned that I should be feeling it quite so early. It was 10:30! I'd already played an hour and a half solid, nearly a whole gig at some venues! Losing track of the time to that degree is always a good sign!

So I took a break then resumed on electric guitar for my second set, deciding now to play through to the end. When it came to the walk around I managed a complete loop, in through the pool table / games room, a quick sprint through the indoor music room (quick because I could hear the guitar from there so couldn't'y tell if the signal was getting through!) and back out through the restaurant, catching Laurence (the owner) by surprise just as he was enthusing to someone about the wandering guitarist :-). Big round of applause at the end and audience clapping along as I kick in 'Mornin' Sun' a John Lee Hooker inspired original, I've recorded a number of times in different formats.

Finish up with 'Let the Good Times Roll', with a version of 'Poor boy' for an encore.

I stopped over, sleeping in bar as the upstairs flat was let. Got a reasonably comfortable arrangement of seats to sleep on (cushioned ofcourse). Being quite tired I was glad not to have to pack the car and drive off to somewhere else to stay, well worth the occasional disturbing noise from the beer coolers!

Woke arround 10:30 or so, just as they were starting to cleanup and open for the daytime session, recharged with a good dose of coffee, got loaded up and said my Good byes to Laurence and staff, with promises of more next year!

So now have a few hours gap before the Le Kennedy gig tonight in Angouleme. Which I will spend sleeping, though I might just have go at facebook scrabble first!

Did I forget the Sunflowers?Views: 48261

Sleepless and Dull on the FerryViews: 48378

Blues with Wine in France and Beer in KentViews: 48449

News For walker Broad In MarchViews: 50177

Walker Broad Videos and Burnt Ice at The Wine VaultsViews: 51318

Off To France & Bullfrog Tickets for Geoff AchisonViews: 53540

Enhancements to the Walker Broad BlogViews: 53321

Great Feedback From The PoacherViews: 53082

Blues News: West Side Blues @ The Fawcett, Reverbnation and more....Views: 54071