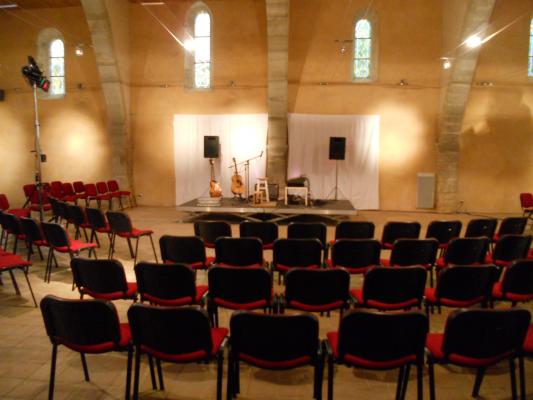 Saturday night's gig was at a church in Le Barry, a hamlet in the village of Montpeyroux, about an hours drive away from Poujol-sur-Orb where I'm, staying.

The journey there wound through one of the most twisty turny roads I've ever travelled on then led up through a rough unmetalled road to the church itself, and what a venue it was. Shortly after we arrived one of the organisers Oliver Collins arrived to let us in to a high ceilinged church hall with roman origins. This gig was going to be a concert! Alison Collins the main contact arrived shortly after, both were very helpful.

With the dramatic venue came a substantial reverb, which proved challenging sound wise but also add greatly to the atmosphere.

As is inevitable in high summer there was a lot of competition from events in the surrounding area, so we were unsure of the expected turnout, but come 8:20 a few people arrived, start time was advertised as 8:30 but people were still arriving up till 8:45 so the start was delayed, which apparently was quite normal.

The plan was to play two 45 minute sets, one acoustic one electric as usual, Pete Robinson introduced me and I walk out on to stage, quite a formal start... I chose songs and instrumentals to suit the sound of the room, Jiterbug Madras sounded particular effective in the deep natural reverb, as did Pretty Nose which I haven't been playing quite so often.

I took advantge of the setup to walk on playing for the electric set, and the walk arround in Sweet Little Angle was delight in such a venue.

A great reception! I sold a quite few CDs in the break, then some at the end. There was no set fee with donations encouraged at the end of the night, the audience was most generous in that regard.

This gig had been a bit of an experiment, and one that worked well, a big thanks to the organisers, Alison and Oliver, and not to forget Pete who not only booked the gigs for me but has been acting as my road manger for this part of the tour. All greatly appreciated!