Musicians can have hobbies too, one of mine is making country wines, read about my experiments, succsessful or otherwise.

Getting Back Into Home Brew!

I've been through a few phases of this hobby over the years, the last being around eight to ten years ago. I've kept hold my demijohns and a few other bits of kit knowing I would probably start up again at some point (not because I was hoarding, honest guv!). In fact two of them still has some wine in, one had half a batch on what I think was a carrot wine and the other a gooseberry and raisin, which had been started at least nine years ago! Both were taking a particularly long time to mature, but nether had gone off. There's a difference between a one gone bad and one that doesn't taste good yet!

I was on the point of giving up and having a clear out, but before pouring it all away down the toilet I thought to give it one last taste. Both had come good, both had a bit of a sherry tinge due to the airlocks having gone dry a few times, the gooseberry a little dry but drinkable. I even risked sharing a glass with Tracey and she affirmed it was good wine!

So re-enthused I decided to get a batch of Apple (4.5 litres LIDL apple juice and 2lbs sugar) going and a see if I get get it ready for Christmas (we were in October 2019 at the time). I also started of a batch of mead (4 lbs honey, 2 litres apple, 1 litre red grape). I knew the mead wouldn't finish in time but was optimistic about the Apple.

The apple did indeed come out in time, with the help of some stabiliser and finings it came out nice and clear but a bit too sweet, but quite drinkable if you like a sweeter wine.

When I tested the mead though, even though not quite finished it was incredibly over sweet, I think I misremebered how much honey to put in, perhaps just 3lbs would have been enough. So given that the apple had been so sweet I decided to split the mead in two and combine with some more apple juice to aim for a dryer combination, these two are just slowing down, though still bubbling and look to be clearing naturally. 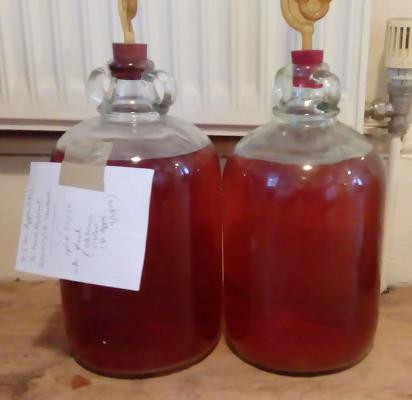