For quite a while now I've been intending to try out making a video where I play all the instruments, and having set up my laptop and audio interface etc in a new space (more about that in another blog maybe) I decided it was time to give it ago.

I decided to use my instrumental "Shufflin'", most often performed with Walker Broad these days, as it's one that splits easily into three parts, all off which I'm moderately comfortable playing, so not too much fussing about getting the best take and video at the same time!

Here's the end result for anyone who doesn't want wade through my description of technical stuff...

How I did It

So here is where it gets a bit technical...

My lockdown studio setup, consists of a M-Audio Ultra 8x8 USB audio interface attached to my ageing HP laptop running Debian 9. Software wise on the laptop I'm using the Ardour 5.4 DAW with the ''Jack' low level audio system. I love the concept of 'Jack' where you can virtually wire the inputs and outputs different software elements together.

My Line 6 pro was setup running into input 3 of the M-Audio (the first two being microphone pre-amps). As I was only using one input at a time each time I added a track to the project in Ardour I had to remember to reassign the input, as Ardour helpfully always selected the next free one, that bit me later!

The video would be recorded on my Zoom Q2 HD along with an additional audio track to capture the acoustic sounds, plus a little stray birdsong!

I planned to record three tracks, videoing myself as I played them, starting with the rhythm guitar part to define the structure.

Next up was the bass part. Not being a bass player this was probably the most demanding part, so it was very frustrating to be half way through a great first take only to realise I hadn't reassigned the recording input on the bass track! Thankfully I had at least muted the record on the rhythm guitar track so hadn't over recorded the guitar!

Second take got myself a good bass part.

I then switched the annoying metronome off to record and video the third and final lead guitar part. Took two takes as I messed up the spoken intro, which I eventually decided to leave out anyway.

At this point I decided to export the audio and transfer operations to my AmigaOne X1000 where I have Audio Evolution 4 installed, software which I'm much more familiar with. I also have the android version on my phone! AE4 may not have all the bells and whistles of a modern DAW but is plenty enough for this project, in fact the lack of bells and whistles makes things easier and faster when you don't need them!

First off I produces a very rough mix of all three tracks which I was intending to use to line up the video tracks against in blender my preferred open source video editor.

When I recorded the video I slapped the side of my guitar or bass to create an obvious point to line up the videos, in effect a sort of clapboard. In practice though this wasn't clear enough in the rough mixed audio so I changed to a new tactic. I imported the original audio tracks into blender which were easy to lineup to themselves as they were all the same length and then, working one tack at a time I nudged the position of the video audio until there was no obvious chorusing / echo effect between the video audio and the recorded audio. Once I had that right I could realign the video with it's corresponding audio simply by tying in the same offset numbers.

I then setup the video start and stop points, discarding the spoken intro as I wasn't happy with it (am I ever?) and export all the video audio tracks one by one (muting the unneeded ones in the strip settings, clumsy but works).

Then I imported these into AE4 and mixed up my final audio mix, made the bass a bit more bassy, touch of reverb, backed off the rhythm guitar a bit, compressed and boosted the lead part to make it stand out more, etc etc. 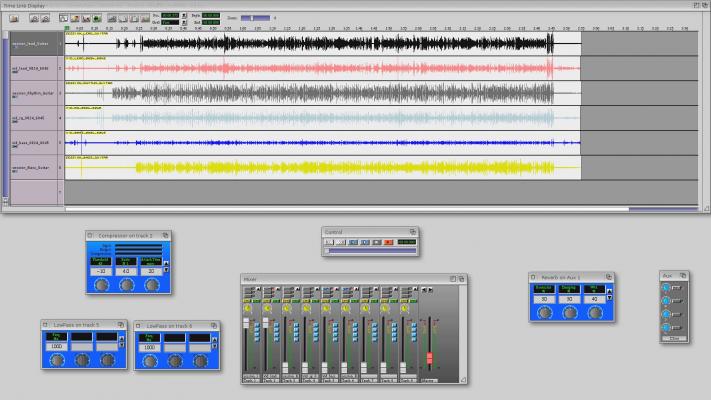 This was bounced back into blender and lined up with the start of the project. I then cleaned things up by discarding all the unused audio tracks so the interface wasn't too cluttered up.

All this was just a slightly scaled up version of my normal work flow but now I had to work out how best to edit the video, switching between each "player" at the right moments.

Each video track has a different overlay modes so initially I tried using the cross fade mode with a IP curve setup to control how much each track faded at anyone time. But with three tracks that got very hard to understand and I couldn't get the them all to fade in from black at the start, so I switched to using 'effects strips' that combine two strips into one. Using a 'gamma cross' effect I combined the first two video strips, then a second ' gamma cross' strip combined the result of that with the third video. This was reasonably easy to manage. I set up an IP curve for each effect strip so that I could fade back and forth as needed. I used transitions of about ten frames, an instant transition seemed to jumpy when I watched the test render. 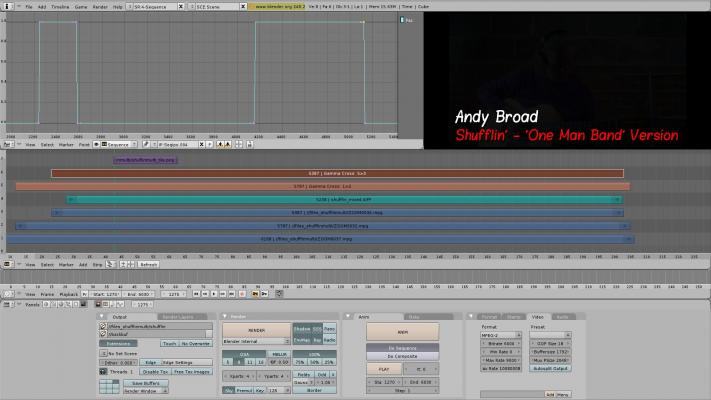 I selected just two or three transitions to show the "best bit" of the various parts, but keeping the main emphasis on the lead guitar. Then I rendered out the video and watched it through, making some small adjustments to the timing of the changes.

That done I added a simple title using SketchBlock rendered out the full resolution version and uploaded to youtube!

Quite pleased with the result, hope you enjoy it!

Comment By :Terry W
Great Andy and you’re looking really good too.x
Comment By :J.R
This is wonderful! Next time I bring you to Ireland I'll advertise you as a band and we might get more money!!!!!!!!!!