It's a bit of a self fulfilling prophesy that the first few weeks of the year are slow in the music business, with many venues cutting back as they expect a low turnout after the end of then festive season.

Whilst some years I've bucked the trend with clusters of gigs in January and February, what with the recovery from the pandemic and all, this year has fallen into the mould with gigs sparse until March.

With that in mind I've been working on extending and developing my set, to introduce some new songs that complement but contrast with the many I already sing. Two such songs are "Delia" and "St. James Infirmary".

Both songs have made brief appearance in my set over the years but neither have really stuck around. I think there are two reasons, firstly, they are more wordy, with more of story meaning the verses must be remembered in the right order! Secondly I've not really made them my own, thus haven't felt as comfortable playing them as I might.

Delia is a song I've enjoyed listening too by many artists over the years, there's a great version by Martin Simpson, and I heard many great version at the Railway Folk Club in Southsea, played by the more ragtimey end of the guest artists, spectrum, whilst definitely a blues song, to my mind, it's often found in the repertoire of the more folky artists, possibly due to it's balladic nature.

I first came to learn it myself as part of a set of a blues songs sung / written by Bob Dylan, compiled specifically for a concert at a "Dylan Convention" organised by John Roberts, some years back, and revisited it more recently for the "Dylan And The Dead" weekend. It quickly drifted out of my set the first time but this time I was determined to make something of it and keep it going.

So I set to working on my approach to the guitar playing, at the same time practice the singing aspect to lock the lyrics in my head, I hate to use lyric sheets at gigs, and if I do it's often too dark to see them!

The song is one of a number of songs written about the murder of 14 year old Delia Green by Moses Houston in 1900. This version of the story derives from two Blind Willie McTell songs "Delia" and "Little Delia" though most certainly written by him they have passed into the public domain due to the timing of American copyright law changes.

The first step was then to listen to various of the takes on the song, and naturally in this modern day, YouTube but also Spotify are great resources for this. I was familiar the Dylan version already.

I checked out the Blind Willie McTell version, this has a much faster rolling rag time feel to it, the chord prigression is little different to most versions played too, particularly arround the turnarround. I liked this approach but playing around with it I found that it didn't fit with my way of singing the song, which had, by now, got settled in to a degree in way that I liked. Another famous version is by Dave Bromberg, some whose music I'm not as familar with as I probably should be! Just to confuse my search his version is spelt with an "h" "Dehlia". This has a very nice melodic feel to the guitar playing.

I had feeling though that there was a version by The Reverend Blind Gary Davis, and many less famous youtube versions credited their version to him, but search as I may I couldn't find a trace of the original, either on YouTube or Spotify. It seems though the Gary Davis' version might be called "All My Friends Have Gone" or something similar and found Stephan Grossmans version of that.

This version has the slide up to a high C followed by a decent following the melody on the second half of the verse that I had picked out from the Dylan version, and also a an ascending base line from the F to the G after that, which I had instinctively felt should be there. No doubt I've heard this version or something based on it before and it's filtered out of my subconscious.

So to work on my own take on the song, the only way to get to that is with lots of playing, and deliberatly choosing different voicings of the chords to see what felt good and what didn't.

My starting point was based mostly arround open C & G chords add the melody in with my little finger, but I find that a bit restricting, almost claustrophobic as I like to move around the fret board more, so I switched out the open C shape for a the barred C at the 3rd fret, albeit fingered without the barre, and voiced the following melody notes over the G cord at the 7th and 8th frets of the G & B strings, as my ring and little fingers were fretting those strings in the C chord it was natutal to slide them up to the 7th / 8th fret, and put the 3rd of the G chord (B) in the bass forming a Bm#5. 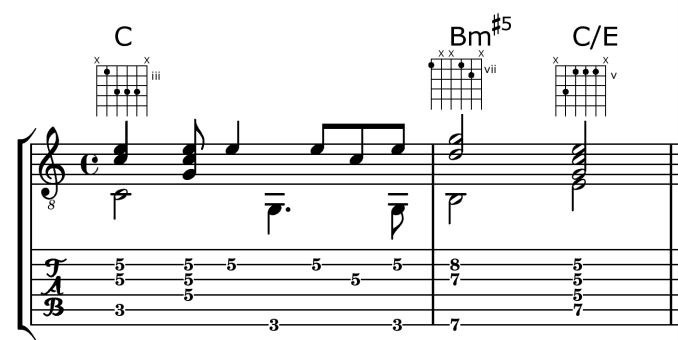 After a few iterations I found myself either dropping back to a C with an E bass, or hanging on the Bm#5 for the whole bar depending on how the words fell in each verse. Later still I added an Fmaj7 here during instrumental breaks.

Mentally I was taking the verse as 4 distinct phrases, so for the second phrase "She gambled all around" I switched the C for an Am (fretted as a Am6 at the 5th fret) dropping to the same shape for a Gm, open C and back to the barred C following the melody. 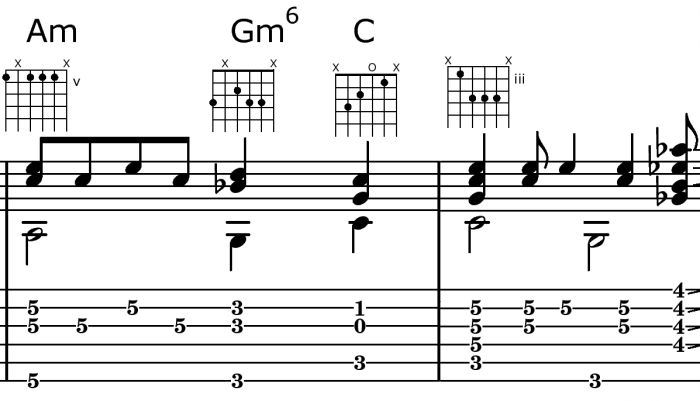 The third phrase is where it hits that distinctive high C, to approach that I found I could slide in from a half barred B6 (first finger across all four top strings) to the C6 and drop my little finger down to hit the high C. Initially I just lifted my little finger up again to replay the C6 before a two fingered slide down to the open C chord, but after listening again to the various other versions I realised that second C6 ought to be an F and it was easy enough to drop in my second finger into that half barre to for an F on the top three strings. For the instrumental breaks I added a slide up to the start of the slide down and an extra note to make a more ornate phrasing. 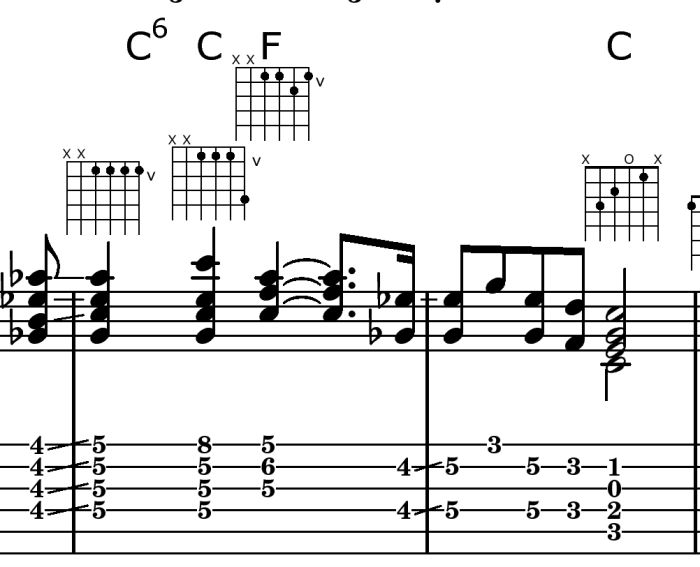 That brought me neatly to a F with the thumb playing the bass note under the fourth phrase of the verse, the little finger adding a melody note in, thumb to F# to form an F#dim on the way to the G for the refrain ("All I ever had is gone" / "All my friends are gone" depending on the verse) and back to whichever C voicing felt right at the time. For the instrumental breaks the G chord was replaced with a single note phrase in G major with pull off and hammer ons....

So if you not a guitarist and have got this far, thank you for being patient with all the gobbledegook, if you are I've scored out the basic structure for you download if you choose to have a go at it.

I'm really quite pleased with the end result, an arrangement that sits comfortably with my voice and refers back to earlier versions whilst adding my own jazzier tinge to the sound.